Bow hunting fans beware – the Irish Setter Rutmaster 2.0 might not be all it’s cracked up to be. After having tried the boots myself, putting them through rigorous tests, and finding that lots of other users have had similar negative experiences, I would recommend that you look for a different pair of bow hunting boots all together. So instead of throwing your cash on the Rutmaster 2.0, I think you might be better off with a pair of LaCrosse Alphaburly Pro Boots.

Now, don’t get me wrong, Irish Setter was able to hit a few right notes with the Rutmaster 2.0. Actually, it would have actually been a really good boot if not for poor durability, awkward fit, and a hefty price tag. All in all though, it seems the Rutmaster 2.0 just falls short of expectations and needs some major design and performance improvements to become deserving of the cost that it comes hand in hand with.

Still think the Rutmaster 2.0 is worth the purchase? Find out what I learned about these bow hunting boots and why they might not get you out of that rut.

Looks Can Be Deceiving

When you first lay eyes on the Irish Setter 2.0, you might think I was making all that stuff up about it being a bad buy. But of course, there’s more to a good pair of boots than just the way they look. In the case of the Rutmaster 2.0, there’s definitely more than meets the eye.

The thick neoprene uppers can seem durable at a glance and may even feel pretty hardy in the hands. The boot definitely has some weight to it, and feels very well put together upon inspection. However, that might not be the case when you actually put it to the test.

Textured sections on the sides of the soles and the back of the uppers definitely give the boot that robust outdoorsy aesthetic that can often win over the hearts of unwitting buyers. So yes, when it all comes right down to it, the Rutmaster 2.0 does look like a pretty standard bow hunting boot. But then again, that shouldn’t be enough to drive you to a decision.

One of the biggest issues I had with the Rutmaster 2.0 was the boot’s fit. Although it does have an adjustable strap around the top of the shaft to increase room around the calf, the boot doesn’t offer a lot of space around the ankles. Getting your foot into the boot can be a major challenge, and I wasn’t the only one to have that problem.

Lots of buyers have voiced their issues with the ankle region of the boot being too narrow to fit the width of a foot. Plus, because the uppers are so thick, they won’t really budge too much even if you put all your force into it. Funny enough, the boot ‘boasts’ a unique ExoFlex technology that’s supposed to make them easy to wear. Unfortunately, it doesn’t really do what it promises.

Now, because the ankle area can be such a tight fit, the boot causes some localized discomfort around the ankle joint. Another thing is that the boot won’t be too pliable around the area so ankle movements can be significantly restricted. For anyone who has ever walked around the bush, this can be a major disadvantage because of the difficult terrain that calls for complete physical control.

The outdoor terrain won’t be forgiving, so it’s important that your chosen hunting boots stand up to the challenge of demanding nature trails. Unfortunately, this is another arena that the Irish Setter Rutmaster 2.0 fails to satisfy.

With lackluster durability and performance, the boot can give up on users pretty quickly. While that depends ultimately on how often you use them, many buyers have complained that the Rutmaster 2.0 can cave in to wear and tear after just 3 to 6 months of use, which in my opinion, is unacceptable given the price tag that comes with them.

The vulcanized rubber breaks away, the trimmings around the edges of the shaft wear out easily, and the soles can peel off leaving holes that causes moisture to gush in when the boots are submerged in water or mud.

Ultimately, they don’t really fulfill their promise to give you a long lasting hunting companion. This is much unlike the LaCrosse Alphaburly Pro which is popular as one of the longest lasting bow hunting boots on the market, giving users superior protection, support, and safety even years after purchase.

If there’s one thing that the Irish Setter Rutmaster 2.0 got right, it’s traction. The boot comes with a very aggressive sole pattern that gives the boot some decent bite on demanding terrain. The only problem is that because the boot isn’t technically all that durable on the overall, the soles can peel or split just after a few months of use.

For many users, the problem was the latter. The vulcanized rubber material is very resistant to movement, so frequent bending caused by walking can create a weak spot along the heel of the sole. Overwork the area, and you’ve got yourself a broken outsole that ultimately causes water and moisture to flow into the boot when submerged.

Nonetheless, traction was satisfying and I did feel safe trekking the great outdoors in the boots while they were fresh from the box.

To make the Irish Setter Rutmaster 2.0 more appealing to buyers, the design incorporates a handful of different footwear tech elements. These allegedly improve its performance. In my opinion, only two of these technologies actually make the quality control cut.

Firstly, the ScentBan tech is pretty impressive. This is incorporated into the materials used for the interior of the boot. Their function is mainly to prevent bacteria and germs from causing foul odors. For outdoor use, this can be a major advantage. Constant exposure to mud and natural terrain can make boots stink up pretty fast. So ScentBan would have been an intuitive tech element. Sadly, when the boots’ sole breaks and rips, the interiors are exposed to moisture. The result is that the ScentBan tech is rendered useless. 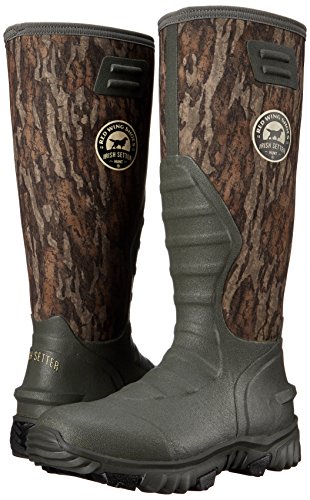 Secondly, the RPM Technology incorporated into the boot material makes them lightweight for greater maneuverability and control. This does work out to reduce fatigue. But then I feel that the lightweight construction is also what contributes to the boots’ general lack of durability.

Other than these two technologies, the remaining are lackluster. ExoFlex, as I previously mentioned, doesn’t help with the boots’ flexibility. This can significantly affect your comfort and control, making it uneasy to navigate challenging terrain.

Pros of the Irish Setter Rutmaster 2.0

Cons of the Irish Setter Rutmaster 2.0

As much as I wanted to like the Irish Setter Rutmaster 2.0, there are just too many flaws. That said, I can’t bring myself to recommend it to anyone. The durability, comfort, and overall performance of the boot just really don’t satisfy. Plus the fact that they’re not all that cheap, it’s hard to say that they’re worth the cost.

So if you’re looking for a suitable pair of bow hunting boots, I recommend that you check other options. In my own opinion, the LaCrosse Alphaburly Pro boots make a much better choice. These boots are a whole lot more durable, comfortable, and even slightly cheaper.

Compared to the Rutmaster 2.0 that really just falls short of expectations, this alternative makes a much better investment. At least, you can count on its promise to stick around years after you take them on your first hunt.