Fox had multiple goals when it created the Instinct boot. The company wanted to retain the subtle feeling of a leather boot, and combine that with instant comfort that required no break-in time. However, the boot also needed to offer ultimate ankle support, lasting durability and remarkable style. 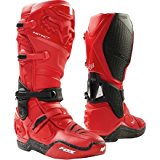 To that end, Fox began designing what they considered the perfect boot…literally from the ground up. From a revolutionary new substance for the outsole all the way to the innovative closure at the top of the boot, the Fox Instinct is simply a marvel of engineering ingenuity.

According to just about everyone, the effort has been wildly successful. There were only two small flaws worth noting, and the most significant one was corrected almost immediately. Although we will certainly cover them, suffice it to say, they can wait until later. Here is what you really need to know about the boot. 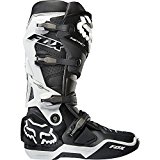 Fox enlisted motocross legend Ricky Carmichael to assist in the design of this boot. It went through 6 prototypes and literally hundreds of tests over a 3 year period before evolving into the Fox Instinct we see today. And it raised the bar significantly in motocross boot performance.

With the Instinct Boot, Fox has managed to combine the highest levels of function and fashion, and vaulted into the top-of-the-line boot arena. Despite the fact that it’s mostly made up of – extraordinarily durable – synthetic space-age materials, the Instinct somehow still manages to keep the resonance of a leather boot. This is a historical achievement in itself, so it’s mind-boggling is that this isn’t even the most remarkable feature of the boot.

The most innovative design feature of the Fox Instinct is that it’s a hinged boot, with a patented buckle design that is extremely simple to use and surprisingly easy on the fingers. The unique patented design utilizes a pivoting clasp lever system featuring a friction enclosure. No pins are used in the design, and the buckle is meant to last the entire lifetime of the boot.

The buckle on the Instinct works like a ball & socket joint, using a spherical locking head. A natural alignment of the straps is created by the clasp, which pivots 8 degrees in both directions. The buckles move with the boot as the foot flexes.

The entire system is ridiculously simple to use and displays the same smooth operation every single time, without fail. Should they get damaged, however, both the buckles and the closures are replaceable.

Apparently, Fox’s development team wanted to create a substance that combined superior grip with bulletproof durability. The result was DURATAC, a rubber compound that is used on the outsole of the Instinct, as well as the burn guard and hinge cover. Using Duratac on the hinge cover and burn guards of the Instinct provides ultimate traction against the bike, and eliminates the need for traction pads or grip tape.

The Duratac sole not only resists premature wear, but also provides excellent traction on foot pegs. Buyers have noted that the sole shows very little evidence of marking even after months of use on sharp titanium pegs. Like the buckles, the glue-on sole of the Instinct is replaceable, although it is also backed by a lifetime durability guarantee.

Of course, the hinged ankle design in the Fox Instinct offers the ultimate in roll and twist protection, in addition to significantly more comfort and mobility found in standard leather boots.

The hinge design is Full Response Engineering, which allows impressive lateral stability and near effortless linear mobility while still providing a controlled range of movement. A patented hinge lock-out feature stops rear motion before the ankle can be hyperextended, should you happen to catch your toe in a rut. 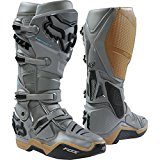 However, there are other notable protective features for which riders will be extremely grateful.

A curved design and gasket at the top of the boot creates a fully secure seal and an excellent grip on the bottom of your knee braces. Increased mobility is allowed by the elimination of a Velcro closure.

Riders safely get completely unobstructed contact with the bike, thanks to the texture and shaping of the boot’s medial side and the entire outsole. They also find their feet lower & closer to the foot peg. Additionally, shifting is easier and there is better feel and control of the rear brake, thanks to the lower toe box.

The Fox Instinct is specifically built to allow your foot to be as low in the boot and close to your bike as possible. Duratac is also found high on the inside surface of the boot, in order to prevent burning from exhaust systems.

Buyers seem to be in unanimous agreement that there is absolutely no break-in required for the Fox Instinct, it is supremely comfortable right out of the box. Some have said that they opened the box, wore the boots straight to a morning practice and then went on to race in them in the afternoon, with no problems whatsoever. 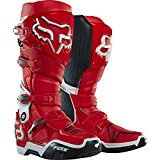 Many have gone even further, to say that it is actually the most comfortable boot interior they have ever experienced. There are multiple contributing factors for these reactions. 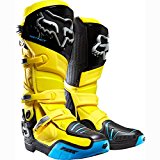 However, the Fox Instinct contains what is referred to as a progressive cushioning system, not unlike that which is found in a running shoe. It includes: 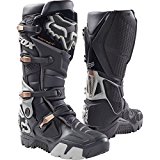 It’s definitely worth noting here that, in spite of all the layers of the cushioning system – insole, midsole, shank and outsole – the Fox Instinct still allows an outstanding feel for the pegs. Even when new, your foot doesn’t feel isolated from the bike.

The comfort level of this boot is so outstanding that it can be worn all day just like a standard ankle boot. So they’re great for off-roaders, and motocross racers can just keep them on between races. 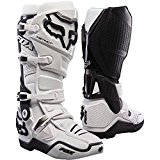 As noted previously, there seem to be almost no complaints at all about this boot. So, though it may feel like nit-picking, here are the only drawbacks that anyone has given voice to. And, even then, they feel more like observations than complaints.

You will be hard put to find less than complimentary descriptions of the Fox Instinct, either in reviews or by motocross users. Three years of testing, plus the expertise of motocross leaders in addition to engineers, have resulted in a boot that is stylish, comfortable and offers amazing protection.

Basically, Fox Instinct offers greater comfort and mobility while also providing better roll and twist protection than a regular leather boot. And that is due largely to the hinged ankle design.

Ricky Carmichael admits to being an extraordinarily picky rider, and his top priority is always safety. Yet, he says the technology behind the safety features of the Fox Instinct are state of the art and he is extremely pleased with the final product.

It’s hard to argue with a legend. There is no denying that this boot offers the highest levels of quality, style, comfort and mobility without sacrificing safety and protection.

The Fox Instinct is always available in white and black. But it is often available in limited edition (LE) colors, as well.