The Timberland brand is known for its durable and functional boots designed for demanding work environments and outdoor use. They pride themselves in designing great boots that maximize comfort, safety, and functionality so you can go through the toughest stuff without scuffing your feet.

Since they debuted in the market in 1952, Timberland has greatly evolved, souping up their signature yellow boot to provide even greater benefits. Today, the brand’s pride and joy might very well be the PRO Boondock Boots. 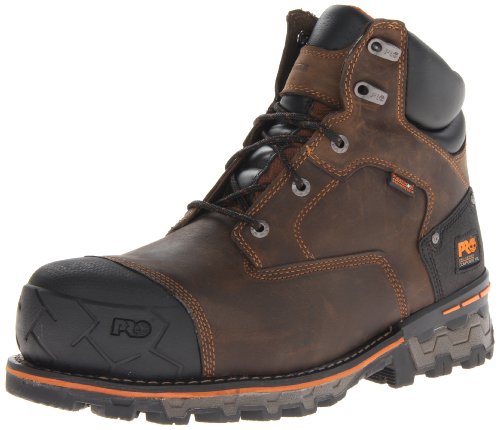 Designed for the daily grind, the PRO Boondocks are as robust, rugged, and hardy. So it’s not unlikely that you’ve heard of or stumbled upon them during your search for the best work boots.

I definitely think they’re a great buy, guaranteed to extend the value of what you pay beyond what you’re likely to expect. But if you’re still on the fence about making that purchase, don’t sweat it. Here are some things I got out of my experience with these top notch work boots that might teeter you towards copping a pair for yourself.

First impressions of the PRO Boondock Boots might have you thinking they’ve been worn before. Yes, the brown leather uppers are designed with a distressed finish to give the boots a well-worn appearance. This makes them look even more rugged, and serves nothing more than aesthetics. 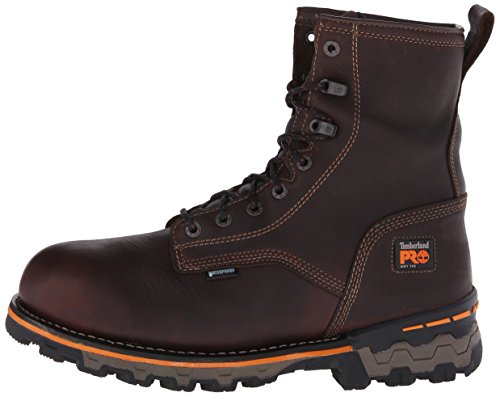 Don’t be fooled though – the leather is anything but worn out. In fact, they’re pretty hard to break in. So expect that you will have to deal with that stubborn, stiff new-leather boot feel for a while. It can take several months before they start to bend and fold to suit your unique foot shape, but don’t worry – they will.

Another thing about the uppers is that they’re oiled. This gives them a matte finish and makes them even more resistant to moisture. That said, they are completely water proof, so you can say goodbye to wrapping your feet in plastic around the field or factory.

Along the outside of the boot, you’ll also notice some pretty thick lace cords, a well-padded collar, and dual-density polyurethane midsoles and TPU outsoles. These connect to the uppers via Goodyear welt construction which is pretty much industry standard. More information on that later, but at a glance, they result to some pretty wicked aesthetics that give an impression of superb durability.

One of the biggest banes of demanding physical work is finding the right pair of shoes to wear on the job. Most of these demanding work environments can sap the life out of any boot or shoe if it’s not constructed well enough. And considering the fact that you’re going to be facing those conditions every day, having your shoes give up on you too soon could be pretty expensive. 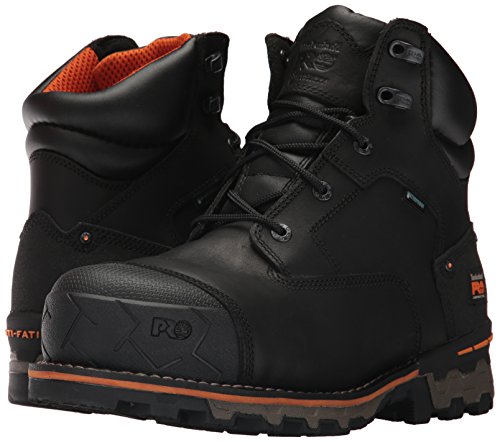 The Timberland PRO Boondock Boots hope to give you a reliable solution. The ultra dense leather is seriously stiff and tough, coated in a special leather oil that wicks away moisture.

Inside the boot are thin waterproof membranes that line the entire interior of the uppers. This prevents moisture from seeping in through the uppers and keeps sweat from being absorbed into the material.

What you end up with is bacteria and odor-resistant boots that you can use to trudge through muddy puddles without worrying about moisture damage.

With the soles, you’ve got standard PU and TPU materials that are both slip and shock resistant. These help give your boot some major bite on a variety of different terrain. They also prevent any unwanted spring in your step so you can plant your feet firmly as you walk.

The soles feature an irregular embossed zigzag pattern with large gaps in between and serious depth. This is why they’re also a hit among outdoor enthusiasts and hunters who want a pair of boots that won’t make tough terrain even more of a challenge.

In terms of overall construction, the PRO Boondocks seem to hit all the right notes. The only downside to the boot might be the weight. At 3 pounds per boot, you might feel like you just finished a comprehensive leg work out after wearing them the whole day.

Taking Safety to the Highest of Standards

Of course, with all the hazards that surround you at work, it’s only normal that you look for something that’ll keep your feet scot-free. The PRO Boondocks get five stars for safety in my book. All in all, it seems the brand has taken all the necessary considerations for workplace safety into account. 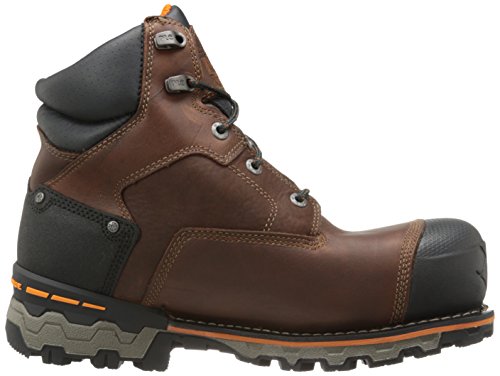 Firstly, the boots are available in soft toe or composite toe varieties. The latter is for buyers who face the hazard of falling objects. Unlike other boots that use steel or other metals for the toe, the PRO Boondock uses composite so as not to conduct electricity. The brand even went the extra mile to meet EH safety standards for your utmost protection.

The laces and threads are all waxed to reduce the chances of chemical and moisture damage. On the outside of the boot are rigid heel cups that limit ankle inversion and eversion injuries. Plus, the boot is also available as a 6 inch or an 8 inch, to give you greater leg protection should your situation call for it.

So-So Comfort Given Its Construction

Taking all this information into account, it’s not hard to see why the PRO Boondock Boot has become such a hit among workers, hunters, and outdoor enthusiasts. The only real issue that users might have with the boot – all things considered – is comfort.

When it all comes right down to it, the PRO Boondock isn’t a nightmare to wear. In fact, it offers some pretty decent comfort given its construction. However because the leather can be stiff, and all the other components of the boot feature bulky, heavy, and hardy materials, it can be a bit of a stubborn fit.

That is, it won’t bend naturally along with your foot, and neither will it break in as easily as other boots. However, there is ample padding and a smart cushioning system inside the boot and along the collar. This can give you some comfort especially when simply standing.

All in all, it’s not the best in the comfort arena. But then again, it’s not really enough to make the boot seem like such a bad purchase. Just make sure to wear it a little more often and it will conform to your specific foot shape and movement.

Unlike other Timberland boots that come in a vast array of colorways and minute style differences, the PRO Boondock wasn’t really designed for aesthetics. So there’s not much to choose from. Even then, the boot does have a few variations that could make a big difference in terms of your satisfaction.

The boot comes in two different heights, namely the 6-inch boot and the 8-inch boot. Essentially, both of them are the same. The one and only distinction that the 8-inch boot has a higher shaft. This is ideal for those working in environments that call for extra protection of the legs. 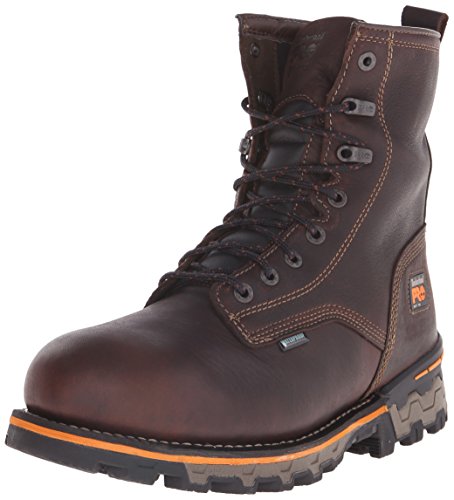 Another variation is the soft toe and the composite toe. Generally, soft toes are significantly cheaper and don’t offer protection against falling objects. Neither can they keep your toes safe from dangerous machines. But of course, not everyone finds that feature essential. It’s is all a matter of finding out whether you need the extra protection or not. This is yet another way that Timberland caters to all consumers by taking out potentially unnecessary features to trim down the cost. 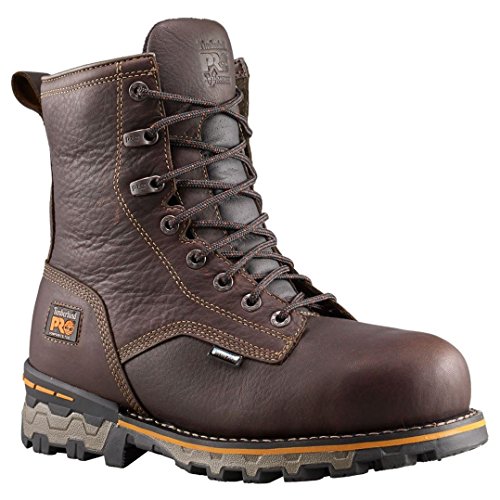 Finally, the boots also come in a range of colors. Mostly, these include blacks and different shades of brown, so there’s really not a lot to choose from. Ultimately, it’s not such an extensive selection as the boots weren’t designed for their aesthetics anyway. To me, it seems choosing between colors depends on what you think won’t scuff up too soon. I wear mine in mostly muddy outdoors, so the brown tumbled leather colorway was my pick

Taking a Peek at Prices

Now, you might be thinking these boots come with a hefty price tag. With such impressive features and functionality, surely the PRO Boondocks cost a fortune. Contrary to that belief though, they’re actually pretty reasonably priced.

The boots can be purchased for just a few bucks over a hundred (depending on the variation you’ve chosen). If you’re looking to get the higher end variations, the price can double. Beyond that though, the boots rarely jump to higher cost. So you may be able to get a top-of-the-line PRO Boondock at a very reasonable price.

It’s hard to pick out any design flaws with the Timberland PRO Boondock Boots. Sure, I did mention the comfort issue. When you consider all the other great features that the boot offers, it’s easy to let that slide.

So, yes, if you’re thinking about copping a pair of the Boondocks, I’d say go for it. They’re affordable, ultra hardy, and impressively functional, so you can get a great deal of satisfaction out of these rugged work boots for many years to come.