What comes to mind when you think about the brand Vans? Clothes, backpacks, and shoes? Out of everything, shoes are the most likely association you make, right? Most of us do. We think of Vans and think of skateboarding shoes or simply fashionable shoes worn with jeans, dresses, etc. Did you know that Vans also make several running shoes? Yup, there are Vans running shoes.

This article will examine the running shoes offered by Vans and try to determine if the sneaker company can produce a product fit to take on the athlete giants like Nike, Adidas, and Puma. It will take a look at the different variations in the line and outline the pros and cons of each one, ultimately helping you make a choice of which running shoe to purchase, or even if the Vans brand of running shoe is the one for you.

Do a quick Google search of “Vans Running Shoes” and you will see quite a few options are tagged in the category – regardless of whether a person could run in them or not. I’ve done a bit of research to pinpoint the most suitable Vans shoes for running:

The Vans Mesh Iso 1.5 is probably the line I would lean toward the most if purchasing a pair of running shoes from Vans. On first glance, they have a nice athletic fit which assists with enhanced heel support. However, it is the UltraCush Lite outsoles and sock liners that sell the shoe as they provide an extremely lightweight, comfortable feel. It also has a mesh textile upper which allows the feet to breathe. The rubber sole helps with grip but there are reviews online that say it wears down faster than they would have liked. 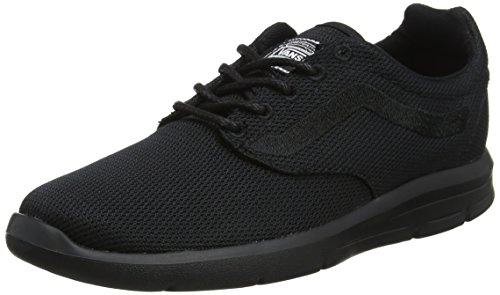 There is the OG Runner, but there is also the Vans Runner. No real difference can be found between the Runner and OG Runner. It is simply a matter of preference which you choose to buy. Some reviewers state that this shoe is a bit too stiff to be worn for running, but they are very comfortable for those who need to be on their feet most of the day. 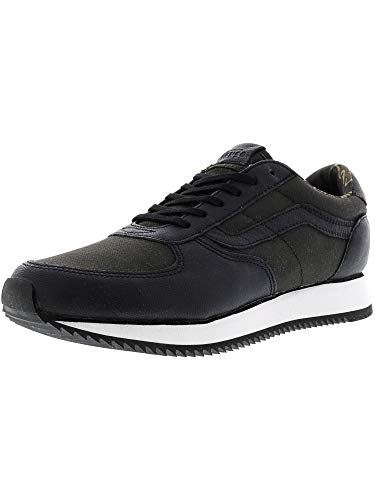 The Boom Boom Runner is again more or less the same as the OG Runner and the Runner. There is only one main difference: the Boom Boom Runner is solely for women. It was created with the aim of inspiring and celebrating camaraderie among women. It was “created as a symbol representing the attitude and essence of female strength, beauty, and creative expression”. Another slight difference is the use of nylon in the uppers. 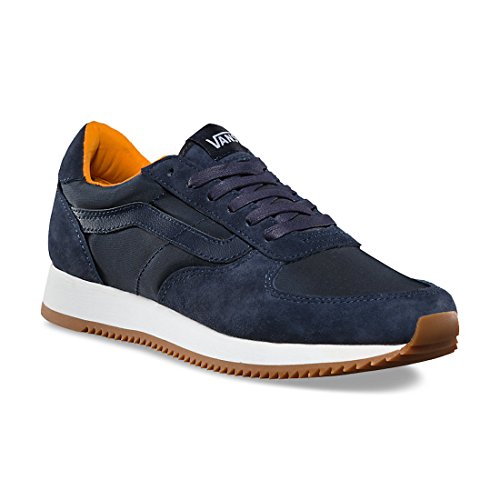 Okay, the marketing by Vans proposes the UltraRange more as a surfing shoe but it actually has the most feature suitable for running than the others mention here. Just make sure to choose the lo-top rather than the hi-top version. What is it that makes these shoes worth mentioning in an article focused on running shoes? 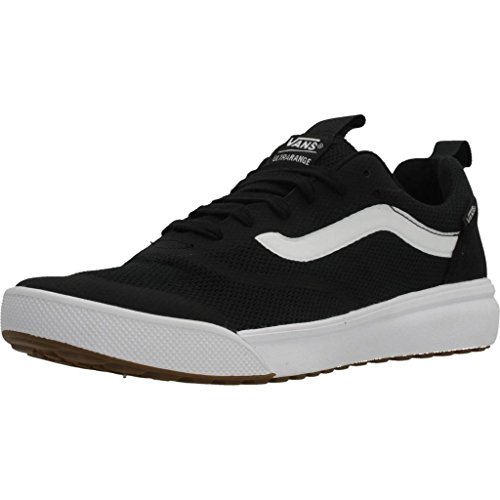 For one, they feature a brand new UltraCush Lite midsole compound that provides optimal comfort and cushioning. Then there is the seamless sock-fit bootie construction that works to reduce weight, rubbing, and hotspots. It also includes synthetic, textile, and suede uppers, fabrics dissed earlier in this article, but there is also fully breathable mesh. Finally, there are durable co-molded rubber reverse waffle lug outsoles. 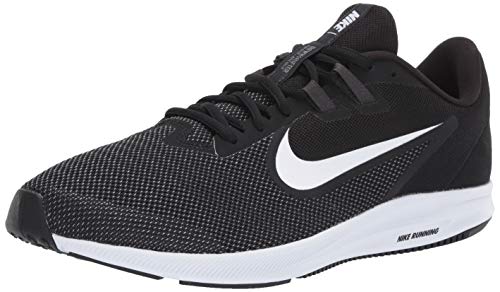 The Nike Downshifter 9 is one of the more affordable options coming out of the footwear giant.  It features a purpose built design specifically tailored for runners, particularly runners who favor their heels over the ball of their foot.  It sports a fully breathable mesh upper like the Ultrarange and a high traction rubber outsole.  The Phylon midsole cushions and provides bounceback on footfall.

Compared to the ultrarange the Downshifter is lighter and offers more and better technologies for running.  The traction offered by the Downshifter is superior on most common running surfaces while the curvature supports a wider range of running styles.

Pros of the Vans Running Shoes

Cons of the Vans Running Shoes

The first running shoe from Vans was a collaboration with Sole Classics and came in the form of the Vault OG Runner LX. Its retro style and bright blue color make this shoe stand out from the crowd. A combination of leather and neoprene was formed to construct the shoes. In terms of design, the clear soles have “O-Y-O” printed on the bottom of both shoes, the Sole Classic logo is embossed on the right side of the heel of the right shoe, while the left shoe outer heel has an embossed bear paw. Both heel tabs feature the Vans logo.

There is actually a really interesting story behind these shoes. Apparently, they on the tale of a boy named Kitchi who was saved from a bear by a river. Before the river came to his aid, Kitchi ran through the forest in an attempt to get away; hence the reason why this is a running shoe.

These may not be the easiest shoes to get and there aren’t really any reviews online singing its praises as a running shoe so it may be one to skip if the main reason for purchase is athletically inclined.

There you have it, an overview of the offerings from Vans which they marketing as running shoes. Plus a sneaky surf shoe entry which could potentially be a crossover to the world of running. I, like many, was skeptical at the beginning if Vans could delve into the world of running shoes. I still have that skepticism but can see there is potential.

Take for instance the Mesh Iso 1.5 line, which is a lightweight shoe with UltraCush Lite outsoles and sock liners for comfort. It also has a rubber sole for good grip and mesh textile upper to provide air to the feet. All the basic elements of a good running shoe are there.

There is the OG Runner, also lightweight and with UltraCush Lite outsoles and sock liners. Another option is the female Boom Boom Runner and its nylon uppers. Then consumers have the choice of purchasing the UltraRange, even if it is marketed as a surf shoe. Runners can easily benefit from the UltraCush Lite midsole, the seamless sock-fit bootie construction that reduces weight, rubbing, and hotspots, and the durable co-molded rubber reverse waffle lug outsoles.

Overall, no doubt there is potential. It does appear that the Vans running shoes are on the right path in impacting the market. However, right now, they wouldn’t be the first choice. A good purchase for those looking for a comfortable shoe, but not ideal for athletes.