Red Wing has been my go-to brand for some decades now. I have several hit boots from this manufacturer, some of which have taken a beating over the years, while others like the Moc Toe 6’’ and the Rangers are still in perfect condition.

I recently added another pair from Red Wing; the Blacksmith in black spitfire leather rough out (more about this later). 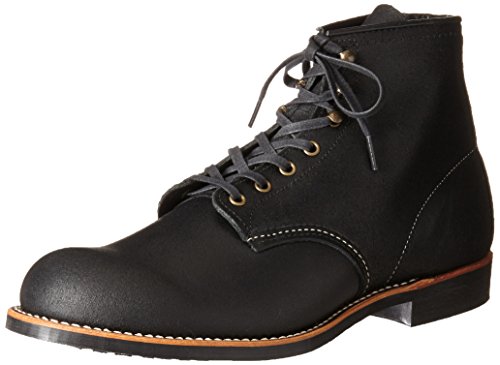 I’ve put a lot of miles on these boots, more than most of my other pairs over the last about six months, and I must admit that they have a pretty good feel (at least for me). I’m sold out.

Here are some of its top-notch features:

Now, the Red Wing Blacksmith Spitfire is available in 2 models; the 3341 and Red Wing Heritage Iron Ranger the 2955. After thorough consideration, and following some positive highlights from the salesperson, I took the plunge with the 2955.

Although I don’t know what I missed out on with the 3341, I’d go with the 2955 Blacksmith boots over and over again assuming their upscale comfort and feel continues to last.

In photos, the Blacksmith 2955 appears just like any other boot. In fact, if you’ve had  the 2955 is pretty much similar to it regarding design.

However, right out of the box, the Blacksmith 2955 has one easily notable difference between it and other boots from this manufacturer: the Spitfire leather.

Red Wing uses a range of leathers for its boots with oil tanned leather, rough out leather, nubuck leather, and smooth-finished leather being the most common.

However, as you can tell from Red Wing Website, this manufacturer doesn’t offer much information about Spitfire leather.

According to them, this is rough waxy suede that has been treated to make it more resistant to wear without losing its insanely soft feel.

I must admit that I was a little bit skeptical when the salesperson mentioned suede. I’ve had a bad experience with some rather delicate shoes made from this ‘leather’ several years back. So I was not ready to spend several hundred bucks on a pair of boots that didn’t seem strong enough for a rainy season.

But it turned out that I was all wrong with this one.

The Red Wing Blacksmith 2955 has a really rough and grainy outside and an insanely smooth inside. When I saw this, the first thought that hit me was that it was poor quality leather that would easily peel off after a few days. That wasn’t the case.

Simply put, the 2955 Blacksmith features a flipped out leather construction design of most standard boots. In comparison, my Moc Toe 6’’ features the rough suede on the inside and the typical oil leather finish on the outside.

You can tell that this boot’s inside is really smooth even without touching it. The outside has been waxed to give it a more durable, glowing finish.

Just at a glance, the Red Wing Blacksmith 2955 seems to have a rough texture to it. That isn’t the case though. The leather all around feels very soft and supple. In fact, I didn’t have to do any conditioning for the first few days.

How is its break-in process? It’s Bad.

Red Wing boots are known as the most notorious when it comes to breaking them in. There are a few common issues that I’ve had with my previous boots that weren’t so pronounced with the 2955.

The Moc Toe work boot, for instance, had a really tough upper piping that was initially curved inwards and pinched in. This piping was really annoying for the first few weeks, and it actually left some notable bruises on my heel.

I was a bit disturbed when I saw similar piping on the Blacksmith 2955. Fortunately, as I have just told you, this spitfire leather was very supple and not as stiff as the leather with the other boots. So I didn’t experience any blisters on my ankles even after being in them for over 5 hours each day of the first week.

I did have 2 minor issues with my right boot though. As the leather molded to the shape of my foot, it formed a crease just below my ankle. 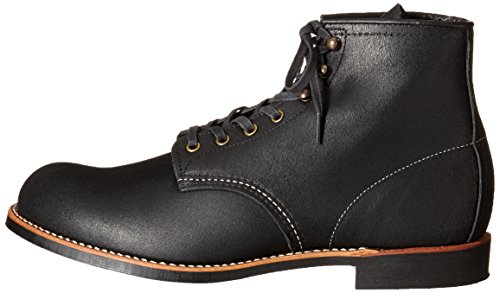 It wasn’t much of a bother, though I was a little bit uncomfortable as it rubbed against my skin. There was yet another crease that really dug in on my right Achilles and caused some pain as I lifted my foot. However, this problem subsided as the leather got softer with time.

What size should you go for?

As with most Red Wing boots, the Blacksmith 2955 also runs a whole size larger. I normally wear a 10 in Red Wings, but I was comfortable in a 9. However, you might consider going just a half size down if you have wide feet.

On this note, I’d also like to mention that Blacksmith 2955 has a different type of tongue from my Iron Rangers. This one is attached to the sides just below the 3rd eyelet. I didn’t have any problem slipping my feet through it. But I think it might be a little bit hectic for anyone with a large foot.

I also like these boots’ lacing system. They have 4 brass eyelets and brass speed hooks. Like most boots from Red Wing, the laces are leather and quite stiff to deal with at first. Fortunately, they soften after a few wears. The speed hooks also make it really easy to take the boots on and off.

What I appreciate is that I don’t have to undo the entire lace to get into and out of these boots.

Let’s talk about the sole

The Red Wing Blacksmith 2955 features the Vibram 430 mini-lug outsole. It’s quite similar to what my Iron Ranger had, though this one has tons of grip on it.

This sole always comes in handy, especially when there’s snow. While it does not offer the most excellent grip, it’s not as slippery as my beat-up Rangers.

This is a bit subjective. If your job requires a steel cap, you might have to look elsewhere since the 2955 doesn’t have it. However, the leather and sole are tough enough for most work sites.

I also love the cork footbed (And you might like it too). The cork molds to the shape of your foot supporting you as you walk. It also adds bounce to your step and offers excellent shock absorption.

Unfortunately, do note that you’ll need to purchase a comfortable insole for these. The boots aren’t cushioned and might be very uncomfortable if you have to stand on them for long periods of time.

I also found it surprisingly lighter weight than the Moc Toe 6’’. This could make a big difference if your job involves lots of walking.

What are its downsides?

It is not lined

One thing that you will probably not like with the Red Wing Blacksmith 2955 boots is that they are not lined. Because of the lack of lining, they are extremely cold in the winter and can be super hot in summer. But you can solve this using some thick socks during the winter and thin ones on hot days.

The leather isn’t super sealed, but it has a fully gusseted tongue. The only issue that I have with this boot’s leather construction is that it’s not fully triple-stitched.

This makes it a little bit less resistant to water than my other fully triple-stitched boots. Don’t get me wrong though, these boots have kept my feet dry when walking around in heavy rainfall.

As is always the case with Red Wings, I won’t be the first one to tell you that these boots are expensive. Their prices change with the type of leather used.

But don’t let the price put you off. In my experience with Red Wings, you always get a good bang for your bucks thanks to their durability.

Besides the Blacksmith Spitfire, this shoe is also available in 3 other colors; Briar Oil Slick, Copper Rough and Tough, and Charcoal Rough and Tough.

As is the norm with Red Wing, all their boots have Goodyear Welt construction, are triple stitched, and have quality soles.

As I mentioned earlier in the article the Red Wing Heritage Men’s 6 Inch Moc Work Boot is another excellent offering from Red Wing.  The boot comes with many of the most impressive features from the Blacksmith including the waterproof leather and expert construciton/design. 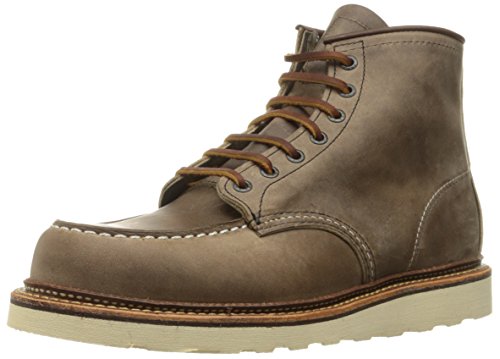 If you’re looking for something outside of the Red Wing brand the Thorogood 804-6201 American Heritage 6″ Moc Toe, MAXwear Wedge Safety Boot (which is quite the mouthful) is an excellent offering from Thorogood.  Thorogood has an excellent reputation as a manufacturer and designer of the highest quality boots around. 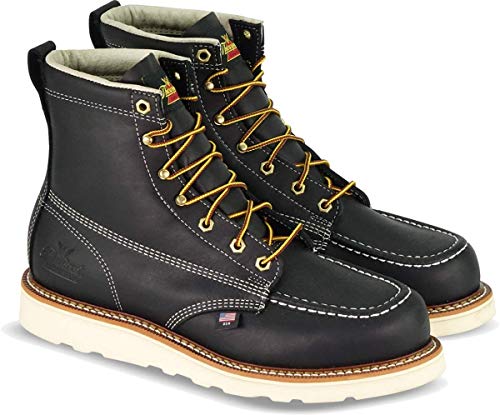 Is the Red Wing Blacksmith a good buy?

In my opinion, the Red Wing Blacksmith is one of the best boots in Red Wing’s line. These boots look great right out of the box and are of high quality.

Unlike several other boots that I have owned from this brand, these took a shorter time to break in since they weren’t so stiff. The only thing that you’ll need to watch out for is the sizing since they run large.

Admittedly, these boots are pricey. However, do know that you’re getting high-quality boots that you’ll find useful for years to come. So if you’re in need of a comfortable casual boot, any of the 4 boots in Red Wing’s Blacksmith line might be your go-to guy.